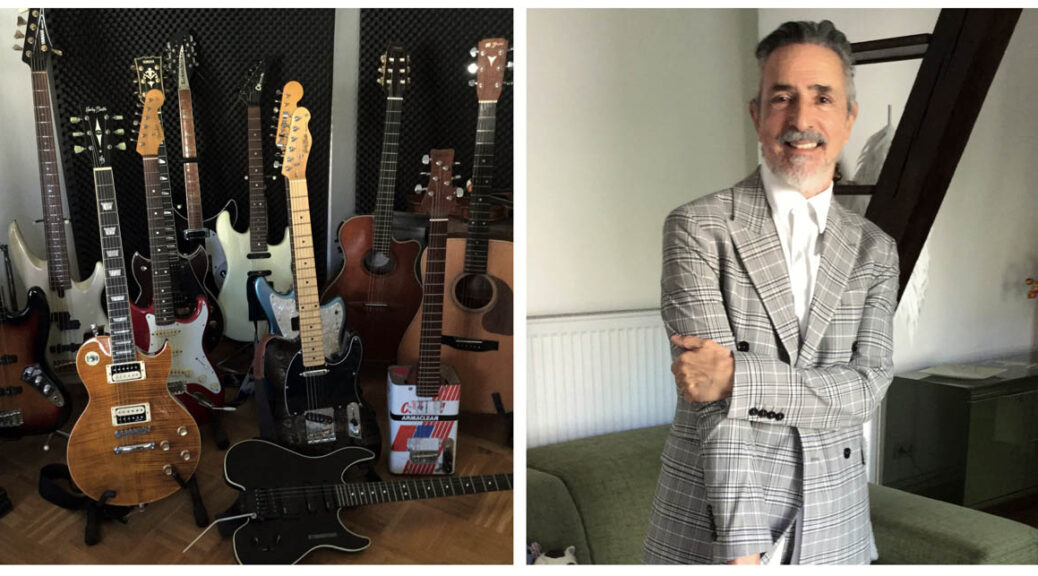 I started at 14 with fashion and at fifteen with music… And those two passions have accompanied me into my sixty eighth year with the same curiosity, excitement and unrelenting ardour that I started out with.

Gilles Deleuze intimated that creativity is the process of ‘constantly becoming.’ How amazing! I believe that the blank page, the moment between nothing and something is one of the most exciting places to be, where everything is possible and anything can happen. It’s been my preferred drug of choice. Time lost in any pursuit whether it’s being creative, sport, reading or watching a film. That loss of time and place is the closest we ever get to becoming immortal. How often have we said to ourselves “I was enjoying the moment so much that I lost track of time.” Creativity is my way of constantly becoming and forgetting time.

Born in the fifties, I was as a hippie teenager in London’s swinging sixties, a rock n rolling singer in some 70’s bands touring around England, a post punk new romantic in the 80’s New York, a confused suit wearing yuppie writing jingles for large corporations in Hamburg in the late 80’s, a rebellious grunge wearing creative consultant and composer in 90’s Amsterdam, a studio owner and wanna be graphic designer in Berlin at the beginning of the 00’s, became a mentor for kids in underprivileged areas of the world, teaching film music together with a bunch of like minded film makers late 2000 until now…

Always walking the freelance tight rope has been both exciting and daunting.

Today, I live in  Amsterdam.

It is like most major cities in the world, multifaceted, diverse, cosmopolitan and exciting. As an expat the differing angles and perspectives that one discovers in a city will most probably always present you with cliches and contradictions, Amsterdam is no different in that respect. The subtle social unwritten codes of conduct have to be learnt and treated with respect as in most places. There’s evolution and devolution, it’s the way of the world right now and Amsterdam isn’t immune to that tug of war between the modern and the old. It’s a beautiful city that literally shines like a diamond in the summer sun… The Dutch light that inspired artists.

Nightlife, daylife, Amsterdam is a pearl like so many other pearls, London, New York, Paris, Florence, Sydney. The worlds an oyster… sometimes it’s lemon and pepper, sometimes it’s just Tobasco. Or if you are Dutch it could also be apple sauce on your French fries. Mmmm! Delicious!

The one place you wouldn’t find in a guide book is a welcoming cup of tea at my place… Yes! Even Jehovah’s Witnesses.